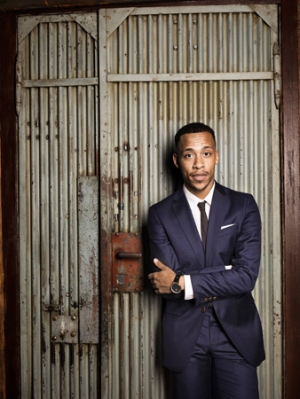 Jerry Hoffmann was born as Jeremias Acheampong in Hamburg on May 30 1989. From 2010 until 2015, he studied acting at the Otto-Falckenberg-Schule in Munich and at the Universität der Künste in Berlin. He made his screen debut in the 2010 release "Shahada", in which he was credited under his birth name and played a young Nigerian coming to terms with his homosexuality.

After being a regular on the award-winning TV series "Zeit der Helden", he was picked as one of the Berlinale Talents in 2013. The following year saw him in supporting roles in the German-US thriller "Hitman: Agent 47" and, opposite Ulrich Tukur and Barbara Auer, in the TV miniseries "Grzimek".

In addition to his TV and movie career, Hoffmann is a renowned stage actor and has been part of the ensemble of the Maxim-Gorki-Theater in Berlin in the 2014/2015 season.

In 2015, Hoffmann was one of the leads in Dietrich Brüggemann's satire "Heil", playing a writer who suffers from amnesia and unwillingly becomes a spokesperson for Neo-Nazis. Hoffmann was also selected for the renowned Fulbright Fellowship in 2015, which is aimed at international cooperation. In this context he studied directing at Loyola Marymount University in Los Angeles until May 2016. Back in Germany, he appeared in supporting roles for Philipp Kadelbach's highly acclaimed sports betting mafia drama "Auf kurz Distanz" (2016, TV), the "Tatort" episode "Der hundertste Affe" (2016) and the youth film "Amelie rennt" ("Mountain Miracle - An unexpected Friendship", 2017). He had a key role in Vivian Naefe's family film "Pauls Weihnachtswunsch" (2018, TV), as the owner of a corner shop and a confidant of the young title hero.

From 2018 on, Jerry Hoffmann continued his master studies in directing at the Hamburg Media School. At the same time, he remained active as an actor. In January 2019, he received a lot of attention as jury member at the Max Ophüls Prize Film Festival, when at the award ceremony he made a blazing appeal to his generation for more diversity in German film. Hoffmann played a leading role in the comedy "Abikalypse" (2019), as one of four school outsiders who want to prove themselves as "heroes" to their classmates by organising a massive graduation party.