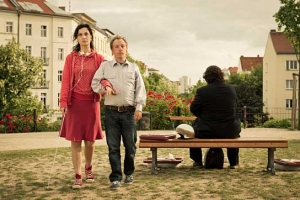 Stephanie Capetanides, Tobi B., Matthias Scheuring (from left to right)

Doll, the Fatso & Me

Europe is a young French woman living in Paris. She is full of joie de vivre and beautiful. She has also just found out that she's pregnant – by Matthias, who is from Berlin. It was a wonderfully romantic one night stand and all she has to show for it is a Polaroid photo of herself and Matthias. That and the pregnancy, of course! So Europe calls her best friend Eva and they both head off for the German capital. She dreams of finding Matthias and making him happy. Europe is blind. But that shouldn't pose a problem, should it?

Bomber is 28, short, very short, a dwarf in fact, and an unpolished Berlin original. He's one of life's artists, in that his art consists of getting through life. When he is sacked from his lousily paid job as a courier, he decides to take his last delivery to Paris, but not deliver it to the customer! Bomber plans to offload the package to an ominous business partner instead. And so it comes to the inevitable: Bomber is totally ripped off and his journey ends with him drowning his sorrows, his pockets empty, at a Paris kiosk.

Bruno is a giant of a man who prefers to keep to himself. He's also a mute. His main occupation happens to be this very kiosk. He has also only very recently come out of the hospital. Nothing serious, of course.

So Bruno helps the small, swearing man – and takes Bomber home to his flat. Nothing breaks down language barriers like beer. Bruno is even able to persuade Bomber to take him to Berlin. The next day, this extremely odd couple sets out on their way.

En route, the mute giant encounters the now abandoned Europe at a petrol station. The duo becomes a trio on a dynamic journey with slight communication problems, initial confusion and many open questions. But as with so many journeys, it's the getting there that counts and, on this comedic road trip, being a dwarf, deaf, dumb and blind don't have to get in the way of having a good time in life.