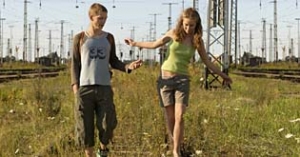 Summertime in Ahlbeck – a bathing resort not far from the Polish border on the Baltic peninsular of Usedom. In a weeks’ time Malte will come of age. Malte lives with his alcoholic father, Dietmar, in a dilapidated old villa that is about to be vacated and completely renovated. Dietmar has lost his grip on life – ever since the death of his wife and the collapse of socialism in the GDR. Malte works in a fish bar and earns a little extra on the side smuggling cigarettes over the Polish border. Life with his father is extremely oppressive and Malte longs to get away from Usedom. And that is just what he intends to do as soon as he passes his driving test.

And then Malte’s sister Hannah suddenly comes back to Ahlbeck, bringing her young son, Lukas, with her. It’s the final straw as far as Malte’s concerned, who, deciding that life at home is simply too much to bear, promptly decides to move in with his best mate, Pawel. Hannah gets a job at a supermarket and asks Malte to take care of her little boy for a few days. Round about the same time, Malte falls in love with a 16-year-old holidaymaker named Annika, who is spending a week on Usedom with her mother and sister. This entirely new situation – particularly his relationship to Lukas and Annika – means that Malte will never be the same again.