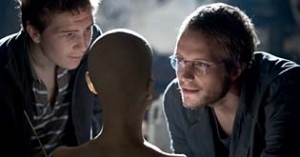 Schoolboy Rico is a typical loner and outsider. He is neither a stellar student nor has any success with the girls or in the sports classes. Due to his constrained hearing ability, the sensitive boy more and more lives in his own world. When one day, a schoolmate is intentionally poisoned and dies, Rico at first does not show a lot of compassion because he never really liked the deceased. But when he learns that the attempt was initially targeted on him, Rico’s life is more and more thrown out of joint. Completely unsettled, he neither finds support with his overstrained mother nor with her boy friend whom Rico hates. Thus, Rico becomes strongly linked with his German teacher Wegner, also an outsider, who more and more becomes a father figure for the boy. Both share a passion for model making. When Wegner suggests Rico to recreate the most beautiful girl of the class as a life-size doll, Rico at first is excited but soon realizes that there is something wrong with Wegner.