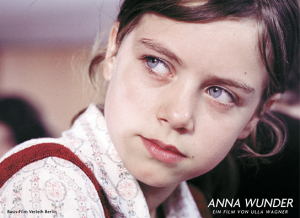 Anna Wunder
A small town in Germany, in the early 1960s, a summer full of surprises. The eleven-year-old Anna has everything but a sheltered upbringing. Her whining brother Rolli always in tow, she increasingly has to take care of her mother Sophie. Sophie is a sensitive but frail woman who tends to drown her sorrows in alcohol.
While Sophie uses her seductive powers to turn every man′s head in the
bars she goes to, Anna has no bigger wish than a real father.When Anna
asks about him, she finds out about Sophie′s great love and despair:
Fritz, the hero who returned from one war only to leave for the next
one, died long ago. But the quick-tempered Franz suddenly turns out to
be his brother. Anna now has an uncle, at least. He is heavily courting
Sophie, but she has no interest in him at all. Meanwhile young Micky is
starting to woo Anna. Anna feels that much could be discovered there if
it weren′t for the worsening situation of her family. Sophie kills
herself with alcohol, but before she does so, she confesses to Anna:
Fritz is still alive, and somewhere in France. So Anna makes a
decision. She grabs Micky′s seabag and a picture of Fritz and sets out
for France to find her father.