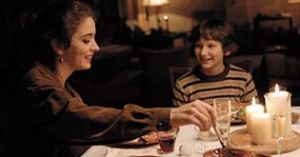 My Mother′s Tears
Alex has just arrived in Buenos Aires to visit his dying father. There he meets his family and old friends of his father, who remind him of his childhood.
Alex and his family had to flee Argentina in the early 80s. They arrive in Berlin, finding a new home in a factory full of weird people. The factory is the only playground for Alex, where his childhood memories find their origin.


Alex has to find his place in this new country. Over time, Alex grows accustomed to this alien world. But he discovers that he has a gift. He can move things with the power of his thoughts.

In the beginning, his parents, Lizzie and Carlos, have problems settling into a foreign country. But soon, Lizzie starts to shoot documentaries. In contrast to Carlos, her yearning for Argentina is fading.
Carlos is completely unable to cope with Berlin. He feels misunderstood and unaccepted by the Germans. The yearning for Buenos Aires keeps him sitting for hours in front of his paintings, listening to Tango music and losing himself in his memories. Slowly, their relationship starts to break down. Alex tries to prevent his parent′s relationship from falling apart with the full power of his gift. But he too is confronted with problems and adventures of his own: a new class in school, Argentina beats Germany in the World Football Championship, and – he falls in love for the first time in his life.
Source: German Films Service & Marketing GmbH