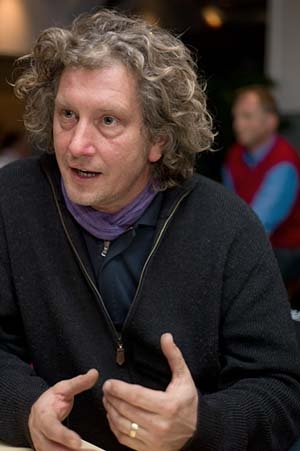 Alexander Berner, born in Munich in 1966, first trained as a graphic designer in London. He then worked as an editor on various music videos, commercials and documentaries. In 1989 he made his directorial debut with the short music documentary "Inheritance" about a multicultural rock band in the USA.

After returning to Munich, he worked as a sound editor, dubbing editor and finally as a freelance editor on television productions and documentaries. In 1992, together with Michael Keller, he founded the company Digital Editors GmbH, which was the first completely digital sound and image studio in Germany. In addition to numerous commercials, they also produced the theatrical trailers for hit films such as "The House of the Spirits", "Rossini" and "Happy Birthday, Türke".

After his debut as feature film editor on the US production "Night of the Archer" (1994), Berner was awarded the German Film Prize for his editing on Joseph Vilsmaier's "Schlafes Bruder" ("Brother of Sleep") in 1996.

He then worked in other areas of the film industry, for example in material development and production. Berner made his debut as a feature film director in 2001 with the drama "Boran", in which Matthias Habich, Mehmet Kurtulus and Henry Hübchen played leading roles.

He then returned to work as an editor on both German and international productions, including major box office successes such as "Resident Evil", "Knockin' on Heaven's Door", "Die wilden Kerle", "Der Baader Meinhof Komplex" ("The Baader Meinhof Complex") and "Die drei Musketiere" ("The Three Musketeers". Berner received another German Film Award nomination in 2007 for Tom Tykwer's "Das Parfum" ("Perfume – The Story of a Murderer"). He won the award again in 2013 for Tykwer's and Lilly and Lana Wachowski's opulent novel adaptation "Cloud Atlas", for which he linked numerous time levels and narratives in the montage.

He also worked with the Wachowskis on their science fiction adventure "Jupiter Ascending" (US, 2015), then again with Tykwer on his international adaptation of Dave Eggers' bestseller "A Hologram for the King" (2016) starring Tom Hanks. He won another German Film Prize for his editing of this film.

Between 2016 and 2019, Alexander Berner together with Claus Wehlisch and Antje Zynga was responsible for editing all three seasons of the hit series "Babylon Berlin" set in 1920s Berlin. In March 2019, Marcus H. Rosenmüller's biopic "Trautmann" was released in cinemas, about the German soldier Bert Trautmann, who became a British prisoner of war in 1945 but then made a career for himself in England as Manchester City goalkeeper and became a legend. The next featur film production Berner edited was also a film biography: the co-production "Résistance" (DE, GB, US, CN 2020) tells of the resistance of the young Marcel Marceau, who later became a world-famous mime, against the Nazis.

Alexander Berner, who also gives lectures at film schools and symposia in Germany and abroad, lives near Munich.