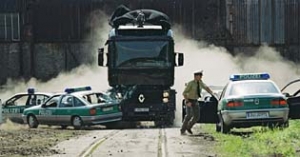 A2 Racer
A group of young speed-freaks with supercharged cars, organize regular high-speed races on the autobahn. These adrenaline loaded, illegal events have lately been disturbed by regular police raids, actually aimed at a group of high-tech car thieves, who are stealing expensive sports-cars from transporters driving along the autobahn.After weeks of intense surveillance, the cops have little to show for it other than masses of destroyed police vehicles and a lot of frustration. Centering all available forces on this case, the investigating inspector assigns Carl, a young rookie officer, to the illegal car races. Carl has a problem: his sub-compact car is a rusty old piece of junk and he quickly falls for the beautiful Nicki, a young girl co-piloting a lightning-fast BMW M3. Carl is quickly drawn into this world of cool guys, fast cars and beautiful girls and after a high speed cruise with Nicki in a souped-up Mustang, Carl is hooked. The car thieves strike again: Ferrari, Maserati, Lamborghini and Viper - a million dollars on wheels. Now there are cops everywhere. Carl and his new friends take action: They need to catch the car thieves or they will never be able to burn rubber without being hassled by the police – they need to defend the very last resort of freedom and individualism – the German autobahn – the one and only highway without a speed limit.
Based on the extremely successful videogame by Davilex that has sold millions of copies in Germany and other countries, A2 Racer is an action-comedy filled to the rim with adrenaline and gasoline.