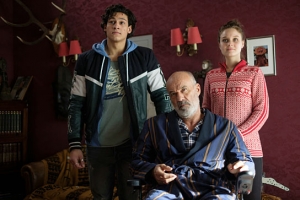 Through a curious mix-up, the petty criminal Denis suddenly finds himself in the position of a caretaker for the stroke patient Raimund. All he really wanted to do was break into Raimund’s house in order to finally pay off his debts to some disagreeable crooks. Instead, he now sits captive in the rich businessman’s house, who, since his seizure has been confined to a wheelchair. When Raimund’s granddaughter Charlotte shows up to check on him, it’s finally too much for Denis. But escape is not an option as a mighty snowstorm is raging in the region. And so he must continue to play the role of the caretaker – very much to Raimund’s dismay, who is doing everything he can to fend off the intruder. In contrast to Charlotte, Raimund has long since seen through Denis’ facade. A game of cat-andmouse begins, in which the handicapped senior and the clever young man put their resources to terrific use...