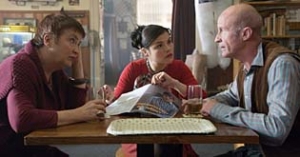 Resist! – Rebellion of the Interns

Till′s life is not moving on as he had expected it to. For years now, he has completed internship after internship but a permanent position is still not in sight – despite the fact that he is rather well-disposed towards the capitalist system. His two friends Tamara and Toto suffer similar fates. And even Sydelia, a half French leftist activist who is actually seeking a paid job, gets fobbed off with a year-long internship.

At this point, Till decides to make a virtue out of necessity. He sets up a company that consults interns. On the one hand, he wants to ameliorate the situation of interns with his company but on the other hand he wants to pocket hefty fees. Sydelia, who sees something good at the core of Till’s actions, tries to persuade him to stir up a revolution of the interns to act against the abuses they have to suffer. And although they both have completely different point of views, they soon realize that they need each other to pit themselves against the economy that uses methods of intimidation to take action against the rebellious young people. Thus, a competition between those who rake in money and those who carve out a miserable existence as free-of-charge employees gets on its way.