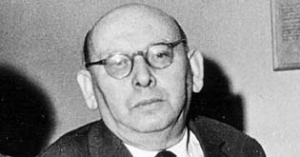 Johannes Eisler was born in Leipzig on July 6th 1898. In 1901, his family relocated to Vienna, where the young boy soon started to discover his musical talent. Together with his brother Gerhart, he immersed himself in philosophical and socialist literature. After graduating from school in 1916, Eisler was drafted and joined a Hungarian regiment. He was wounded several times in WWI and his front experiences alongside with the news of the Soviet October Revolution further strengthened his socialist convictions.

In 1919, Eisler enrolled at Neue Wiener Konservatorium, which didn't fulfil his expectations. The same year, he became a private student of Arnold Schönberg, who taught Eisler for four years without demanding any pay. Schönberg also helped Eisler by providing him a job at a music publisher. In 1920, he had married Charlotte Demand, their son Georg – who was to become a seminal painter – was born in 1928. In 1922, Eisler was awarded the art prize of the city of Vienna for his piano sonata No. 1. He also conducted two workers' choirs at that time. The contradictions between the avant-garde chamber music he produced and his political beliefs finally prompted Eisler to depart radically from his previous composition style.

In September 1925, Eisler moved to Berlin where he worked as a teacher at the Klindworth-Scharwenka Konservatorium. He aligned himself with the German Communist Party although he wasn't an official member, wrote music reviews for the periodical "Rote Fahne" and participated in Agit-Prop group "Das Rote Sprachrohr". Until the end of the Weimar Republic, he exclusively composed pieces which dealt directly with the political struggles of that time.

Eisler also wrote hugely popular songs for workers' choirs and demonstrations. His favourite singer became Ernst Busch, with whom he worked frequently. Ever expanding in his attempt to reach the masses, Eisler composed for the stage, radio and film. He forged a life-long partnership with playwright Bertolt Brecht and wrote the score for the proletarian film classic "Kuhle Wampe".

Residing in Vienna in January 1933, Eisler's 16 year-long exile began. He supported himself by working as a film composer and continued to work with Brecht. A fervent anti-fascist, he gave lectures all over Europe and in the US and tried to politically organize the emigrants. Most of his compositions were intended to support the resistance and the fight against Nazi Germany.

After marrying Lou Jolesch in 1937, he relocated to New York in 1938. He taught at the New School for Social Research before he began a research project on the use of new music in motion picture scores funded by the Rockefeller Foundation. During that time, he also scored films, including Joris Ivens' "Regan". As a result of his studies, Eisler wrote "Komposition für den Film" together with Theodor W. Adorno.

Between 1942- 1947 Eisler resided in Los Angeles. Thanks to his successful work as a film composer - including two Oscar nominations for Fritz Lang's anti-fascist "Hangmen Also Die!" and Clifford Odets' "None But the Lonely Heart", he was financially well off and his house in Pacific Palisades became a meeting point for German and American artists, including Thomas Mann and Charles Chaplin. In 1946, Eisler's brother Gerhart became a victim of the anti-communist witch hunt instigated by the House Un-American Activities Commitee (HUAC). Hanns Eisler himself was publicly interrogated by the HUAC between September 24-26 1947.

The committee decided that he was to be extradited from the United States. Famous artists and scientists (among them Pablo Picasso and Jean Cocteau) rallied on behalf of Eisler, but to no avail. On February 2nd 1948, a farewell concert was hosted by friends like Leonard Bernstein and Aaron Copland and one month later, Eisler left the US for good.

Eisler was reluctant to return to Germany, but in 1949 he settled in Berlin. He collaborated with Johannes R. Becher on the "Neuen Deutschen Volkslieder" and together they composed the national anthem of the German Democratic Republic. Eisler became a professor at the Konservatorium Berlin, which was later named after him, and was a co-founder of the Akademie der Künste.

Eisler, who now predominately composed for the stage, also experienced ideological conflict with the regime in the 1950s, which prompted him to spend a year in Vienna. In 1958, he married Stephanie Peschl. Until his death, he remained the fiercely intelligent, animated and impulsive individual he was known to be. The ongoing productive struggle between artistic innovation and political cause in his work continued well into his last composition.

Hanns Eisler passed away in East Berlin on September 6th 1962.