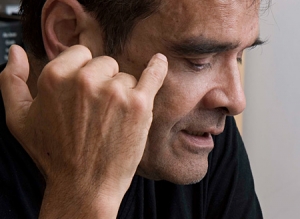 Harun Farocki was born January 9, 1944 in Neutitischein (Czechoslovakia) as the son of the Indian Qudus Faroqui and his wife Lili Faroqui, née Draugelattis. After several stays abroad, he took residence in Berlin in 1962. Here, he obtained his university-entrance diploma and studied dramatics, sociology and journalism. In 1966, he enrolled at the German Film and Television Academy Berlin (dffb). In 1968, he was temporarily suspended for political reasons alongside 18 fellow students, including Hartmut Bitomsky, Wolfgang Petersen and Holger Meins.

Farocki, who started directing his own movies in 1966, caused quite a stir with early works such as "Die Worte des Vorsitzenden" (1967) und "Nicht löschbares Feuer" ("The Inextinguishable Fire", 1969). Critics praised "Nicht löschbares Feuer" as "intelligent and precise". Klaus Kreimeier called it the "most important agitprop movie of the anti-Vietnam War movement". Others, however, dismissed the film as a "Marxist agitprop piece". Ever since, Farocki has been working both behind and in front of the camera. His movies defy traditional genres. He switches between experimental films, documentaries and essay films, in which the director’s presence as well as his attitude always remains perceptible.

Since 1972, Farocki is also working as a writer. In 1973, he became an editor for the magazine "Filmkritik". When the publication was cancelled in 1984, Farocki claimed that the magazine had failed financially because it wrote about movies "without telling the audience what to think of the movies". Besides his work as a lecturer, Farocki also worked for radio and television. During the 1970s, he produced small pieces for the German version of "Sesame Street". Furthermore, he worked at the theater: Alongside Hanns Zischler, he co-directed Heiner Müller’s stage plays "Die Schlacht" and "Traktor" in Basel in 1976.

Starting with "Pilotinnen" (1995), Harun Farocki has also worked on every movie of Christian Petzold. In 1993, he became a visiting professor at the University of California, Berkeley. Since 2000, he also teaches at the Berlin University of the Arts. In 2003, "War at a Distance" was awarded the Special Prize of the Jury at the Film Festival Locarno.

In 2004, the documentary "Nicht ohne Risiko" follows the attempts of a company to find investors for a new project. Farocki went on to produce documentaries "Die Hochzeitsfabrik" (2005) and "Ich gehe jetzt rein" made by Aysun Bademsoy, and presented his video installation "Deep Play" at the 12th documenta in Kassel. "Zum Vergleich", a documentary about the different ways bricks are produced today in industrialized and developing countries, premiered at the 2009 Berlinale Forum and was awarded the ARTE-Dokumentarpreis at the 2009 Duisburger Filmwoche.