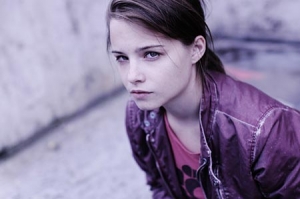 Jasna Fritzi Bauer was born on February 20 1989 in Wiesbaden. From 2006 to 2008 she was part of the ensemble of the Youth Club at the Hessian State Theatre, Wiesbaden. She continued to appear in numerous stage roles, performing at the Tojo Theatre in Bern and the Schaubühne am Lehniner Platz in Berlin among others. In 2008, she was accepted at the renowned Ernst Busch acting school in Berlin. During her studies, she already appeared in films, including a supporting role in Pia Marais' "Im Alter von Ellen" ("At Ellen's Age", 2010). She went on to play the leading role of 17-year old Tourette patient Eva in Andreas Rogenhagen's anarchic comedy "Ein Tick anders" ("Alive And Ticking", 2011), and her widely applauded performance gained her much popularity and also won her the Newcomer Award at the 2011 Mecklenburg-West Pomerania Film Art Festival. She next starred in Wolfgang Dinslage's debut "Für Elise" ("For Elise", 2012).

Afterwards, Bauer played a crucial supporting role in Christian Petzold's "Barbara", which won her the New Faces Award. The same year, she joined the stage company of the renowned Burgtheater in Vienna.

Following her performance in "Scherbenpark" ("Broken Glass Park", 2012), which won her a newcomer award at the Max-Ophüls-Preis, she played a recurring role in the miniseries "Zeit der Helden" (2013). Moreover, apart from appearing at the Burgtheater, Bauer also has been a frequent guest player at other theatres.

She had her next major screen role in Mark Monheim's "About a Girl", in which she plays a suicidal teen who eventually finds a new friend and a renewed will to live. Her nunanced performance in the film won her the 2ß15 Bavarian Film Award for Best Newcomer.