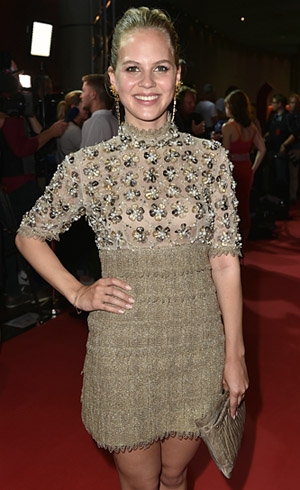 Alicia von Rittberg at the world premiere of "Jugend ohne Gott" in Munch on August 21, 2017

Alicia Countess von Rittberg, born 10th of December 1993 in Munich, debuted in front of the camera at the age of six when she participated in the popular German TV game show "Dingsda" (2000), in which small children explained everyday items. Her actual career as an actor started in 2006, when she appeared in an episode of the German crime series "Der Alte" ("The Old Fox"), followed by two supporting roles in "Die Lawine" (2007) and "Die Sache mit dem Glück" (2008). She became more widely known through her role in the TV series "Meine wunderbare Familie" (2008-2009), in which she played the main character's 13-year old daughter. In the biopic "Romy" (2009, TV), she impersonated Romy Schneider in her teenage years.

Alicia von Rittberg appeared in a supporting role in Christian Petzold's "Barbara" (2012) and in the same year starred in the title role in "Und alle haben geschwiegen" (TV). Her performance as a humiliated child brought up in an institution earned her the Günter-Rohrbach-Filmpreis und the Young Talent's Award at the Bayerischer Fernsehpreis (Bavarian TV Award). The TV film "Alles für meine Tochter" (2013) about a woman who is confronted with her 16-year old daughter she gave up for adoption, received very positive reviews, too. In 2014, von Rittberg received the New Faces Award as Best Young Actress for her role in "Die Hebamme" ("The Midwife", 2014, TV) and appeared in a small role alongside Brad Pitt in the American war film "Fury" as a young German who has to wait on American soldiers.

Director Sönke Wortmann casted von Rittberg as one of the leads in his acclaimed mini series "Charité" (2017), in which she played a fierce and ambitious nurse. Also in 2017, von Rittberg appeared in the American mini series "Genius" about the life of Albert Einstein and played an ambitious elite student in Alain Gsponer's dystopian science fiction film "Jugend ohne Gott" ("Godless Youth"), based on Ödön von Horvárth's novel of the same name.