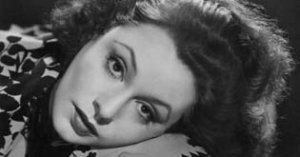 Until the mid-1930s, she performed in numerous revues, operettas and comedies, and toured Sweden and the neighbouring Scandinavian countries. Her career as a recording artist began in 1930, while early film roles presented her as the traditional Vamp. In 1932, Leander married Swedish journalist Vidar Forsell, and after acting at the Theater an der Wien alongside Max Hansen, she appeared in her first German-language film "Premiere", playing a revue singer.

It was a typecast role she eventually continued to play after being put under contract by the Ufa. In 1937, Detlef Sierck (later to known as Douglas Sirk) directed Leander in two melodramas – "Zu neuen Ufern" and "La Habanera" – in which she further established her trademark character of the suffering femme fatale.

Despite her popularity in Nazi Germany, she was denied the title of "State Actress" twice. In 1943, she breached her contract with Ufa and returned to Sweden. Although her films, including Carl Froehlich's "Es war eine rauschende Ballnacht" and Paul Martin's "Das Lied der Liebe", remained in distribution, the German press censored all news regarding Zarah Leander after her departure.

Meanwhile in Sweden, emigrated artists from the occupied Scandinavian countries successfully protested against her participation in a revue programme in Stockholm. Also because of her prominent role within the Nazi entertainment industry, Leander was banned from appearing on stage in Germany and Austria shortly after the war. But in 1948, she returned to perform a public concert in Saarbrücken. While she wasn't able to re-establish herself as a film actress, she enjoyed great success as a singer and revue star and continued to tour internationally. In 1956, she married conductor Arne Hülphers.

Zarah Leander gave her last concert on October 10th 1978 at the Folkanteatern in Stockholm. The day after, she suffered a stroke and never returned to the stage.