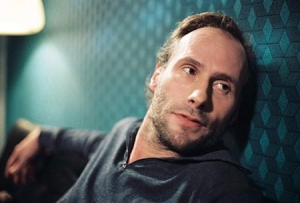 Wolfram Koch, who was born in Paris in 1962, made his screen debut at the age of thirteen, when he played young Hans in the film adaptation of Heinrich Böll's "Ansichten eines Clowns" ("The Clown", 1975). Koch later studied at the Hochschule für Musik und Darstellende Kunst in Frankfurt am Main, and went on to perform at numerous theatres, including the Freie Volksbühne, the Schiller-Theater and the Schauspiel Frankfurt. From 1995 to 2000, he was an ensemble member at the Schauspielhaus Bochum, and since then he has continued a prolific stage career as a freelancing actor.

Apart from his theatre work, Koch has regularly appeared in TV productions since the 1990s. He played Jago in the TV adaptation of "Othello" (2005) and guest starred in popular TV programmes like "Tatort", "SOKO Köln" and "KDD – Kriminaldauerdienst".

His screen appearances include memorable roles in "Leben mit Hannah" ("Living with Hannah", 2006), "Autopiloten" ("Autopilots", 2007) and "Die Entdeckung der Currywurst" ("The Invention of the Curried Sausage", 2008). In 2011, he played a conflicted Catholic priest in Didi Danquart's "Bittere Kirschen", followed by the role of a freewheeling single dad who searches for his son's missing girlfriend in "Die feinen Unterschiede" ("Our Little Differences", 2012).

In the summer of 2013 it was announced that Koch would become the successor of Joachim Król as the police detective in the Hessian "Tatort" TV films. Soon afterwards, he portrayed a father who tries to start over with is family in rural Switzerland in the feature release "Draussen ist Sommer" ("Summer Outside").