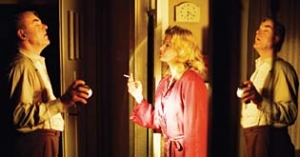 The Invention of the Curried Sausage

During the last throes of the war, Lena Bruecker is 47 years old. Her children have left the roost and her husband has been stationed on the eastern front for years - without any regret on her part. Life almost appears to be over for her – as far as love and passion are concerned – when Lena is given an unexpected new lease on life. After an evening in a movie theater, which, as usual, ends up in an air-raid shelter, she takes Petty Officer Bremer home with her. Just like that – she is suddenly in a mood to show everything she has got left. She cooks for the young man, who reminds her of her son, and shares a drink with him. It turns out to be a nice evening, which suddenly turns into more. Lena offers him a place to stay – first only for the night, but then for good. Facing the cold, hopeless front as an alternative, Bremer decides to desert in the morning. He now places himself at the mercy of a woman he barely knows, as Lena's apartment becomes an island, on which both of them enjoy drifting: Bremer, too young to die in the final battle of a hopeless war, and Lena, who is still young enough to feel her passion for life.

An unusual and dramatic love affair unfolds, leaving the war outside the apartment door – despite its constant dangers. However, the larger threat to Lena's new life turns out to be the impending peace. Thus, she is hiding the fact that Germany has capitulated from Bremer and is virtually holding him prisoner in her home-made war game. When the truth comes out, unplanned and suddenly, Bremer takes off, just as Lena has always feared. At first, Lena is beside herself until she realizes that this elapsed love has been fruitful anyway...