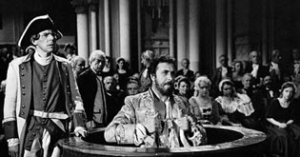 Anti-Semitic propaganda film concerning the historical figure of Joseph Süß Oppenheimer. Born in 1690′s Heidelberg, Oppenheimer became the financial advisor to Duke Karl Alexander of Württemberg. With a rigid fiscal policy, he enabled the Catholic duke′s opulent lifestyle, thereby antagonizing the populace and the protestant estates. Following the duke′s death in 1737, Oppenheimer was arrested; after a months-long trial, he was sentenced to death. On the 4th of February 1738, he was hung in an iron cage on a 10-meter gallows.