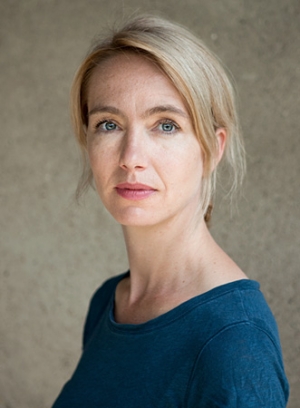 Ursina Lardi, born in 1970 in Samedan, Switzerland, trained to become a teacher (1986-1992). She then moved to Berlin, where she studied acting at the Hochschule für Schauspielkunst Ernst Busch until 1996. After her graduation, she appeared on stage at theaters in Düsseldorf, Frankfurt, Hanover, at the Deutsches Schauspielhaus Hamburg, the Berliner Schaubühne and the Berliner Ensemble. Her stage roles in classical as well as in modern plays include Juliet in Shakespeare's "Romeo and Juliet" (1998, Schauspiel Frankfurt) and Martha Countess von Geschwitz in Frank Wedekind's "Lulu" (Berliner Schaubühne, 2004). She also starred alongside Devid Striesow in Chekhov's "Uncle Vanya" at the Kampnagelfabrik in Hamburg (2008). Since 2012/2013 Ursina Lardi has been a member of the Berliner Schaubühne's ensemble.

In addition to her work in theater, Lardi has regularly been starring in film and TV productions. Her first lead role was in Angela Schanelec's "Mein langsames Leben" ("Passing Summer", 2001), playing a woman from Berlin who observingly wanders through the city. In Sören Senn's award-winning "KussKuss" (2005), she played the friend of a couple looking after an illegal immigrant; in Mona Lenz' poetic relationship drama "Der große Schlaf" ("The Big Sleep", 2006), she can be seen as one of the women sharing a house on a remote island. Ursina Lardi was cast by Michael Haneke for one of the key roles in "Das weiße Band - Eine deutsche Kindergeschichte" ("The White Ribbon", 2009), where she portrayed the rich, but unhappy baroness, whose husband exploits and suppresses the farmers dependent on her. In the crime film "Der Kameramörder" ("The Cameramurderer", CH 2010), she starred as a wife whose holiday with her husband and some friends takes an unexpected turn when some children in the neighboring village go missing. Ursina Lardi played a moving role in the multi-award-winning and critically acclaimed family drama "Festung" (2011) as an abused wife, whose daughter tries to help her break free from the domestic violence cycle.

Other important roles in Lardi's career include among others the villager in Markus Imboden's period drama "Der Verdingbub" ("The Foster Boy", D/CH 2012) and the sociopathic ex- girlfriend of a happily married man in Andreas Kleinert's psycho drama "Die Frau von früher" (2012, TV). In Vivian Naefe's TV movie "Einfach die Wahrheit" (2013), she portrays a woman accusing her ex-husband of sexually abusing their daughter, in Sylke Enders' relationship drama "Du bist dran" (2013, TV), she convinced critics as the successful wife of a man frustrated with his life. For her portrayal of the main character's mother in the period drama "Lore" (2012), she received a nomination as "Best supporting actress" at the Deutscher Schauspielpreis in 2013.

The role of a pregnant woman in the ensemble drama "Traumland" ("Dreamland", CH/D 2013) whose life with her husband and son is only seemingly happy, won her the "Best actress" award at the Schweizer Filmpreis in 2014. That same year, Ursina Lardi played an important supporting role in Christoph Hochhäusler's "Die Lügen der Sieger" ("The Lies of the Victors", D/F 2014), which premiered at the film festival in Rome.