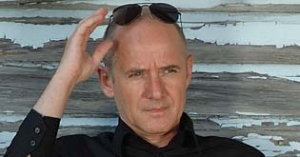 Ulrich Mühe was born in Grimma (then part of the German Democratic Republic) on June 20th 1953. After finishing school and the mandatory military service, he enrolled at the stage school in Leipzig in 1975. After graduating in 1979, he quickly rose to fame as a member of the ensemble at the Deutsche Theater.

Having already appeared in numerous TV-broadcasts of stage plays, Mühe ventured further into television and film. After supporting roles in DEFA productions like"Olle Henry" and "Die Frau und der Fremde", his breakthrough came with "Hälfte des Lebens", in which he starred alongside Jenny Gröllmann, whom he later married. He was internationally praised for his turn as opportunist Theodor Lose in "Das Spinnennetz" (Spider"s Web), Bernhard Wicki's adaptation of the eponymous novel by Joseph Roth. Mühe also excelled in satirical comedies like "Schtonk" (Schtonk!) and Peanuts – Die Bank zahlt alles" (Peanuts).

Mühe always remained a versatile character actor, as proven by his memorable performances in Michael Haneke's controversial "Funny Games", in the ensemble film "Sieben Monde", and in the history drama "Feuerreiter". He played a scheming state official in the action movie "Straight Shooter", infamous Nazi war criminal Mengele in Costa Gavras" "Amen" and a farmer in "Schneeland" (Snowland).

Most recently, Mühe enjoyed great popularity due to his starring role as forensic expert Dr. Kolmar in the acclaimed crime series "Der letzte Zeuge", and made a stunning return to feature filmmaking with his performance in "Das Leben der Anderen" (The Lives of Others), for which he is awarded Deutscher Filmpreis 2006 and European Actor 2006.