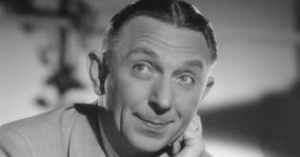 Franz Theodor Schmitz was born June 10, 1903, in Hannover. He made his stage debut at the age of 18 at the Hannover boulevard theatre Schauburg and played in numerous comedies and expressionistic dramas during the following years. In 1923, Lingen – who named himself after his father's birthplace – became a cast member of Neues Theater in Frankfurt am Main.

From 1929 on, Lingen performed in Berlin, for instance in Brecht's "Dreigroschenoper" ("The Threepenny Opera"), and in avantvarde plays, but also in cabaret and revue programmes at Kurfürstendamm. In 1936, Gründgens brought him to Preußische Staatstheater, where Lingen stayed until 1944. During these years, he started to write his own plays. In most cases, Lingen also directed the plays and played the leading role. Later, Lingen also wrote librettos for operas and operettas.


In 1930, Lingen started his film career in comedies and musical comedies. He also played friendly villains in several of Fritz Lang's crime films ("M", 1931; "Das Testament des Dr. Mabuse" - "The Crimes of Dr. Mabuse", 1932/33), although he most often worked with directors E.W. Emo and Geza von Bolvary with whom he colaborated until the 1950s. From 1933 on, Lingen solely played comedic roles and specialized on squeamish characters who try to preserve decorum even if the situation is completely hopeless. He starred alongside Hans Moser in 24 films. In 1936, Lingen made his debut as a director with the four-part series of "Eulenspiegel" short films. From 1939 to 1956, he directed 18 feature films, including a buoyant film version of Paul Lincke's operetta "Frau Luna" ("Mistress Moon", 1941), starring Lizzi Waldmüller. One of his most successful appearances was his double role of a building contractor and a servant in Robert A. Stemmle's film version of Lingen's own play "Johann" (1942).

After the war, Lingen at first toured the country with the artists collective Bad Ischl. In 1946, he became an Austrian citizen and regularly performed on stage until 1971. The post-war film business at first offered him leading roles in remakes of successful early sound films, in sportive slapstick comedies, and in sentimental regional films. During his film career and particularly towards its end, Lingen more and more took up on nervous, and sometimes even unnervingly hysterical, characters who lose their head and their authority in turbulent scenes that derive their humour strictly from the situation, for instance as the principal in the "Pauker" comedies.

On TV, Lingen, who also hosted entertainment shows and appeared in early film sketches, was sometimes able to prove himself as a serious artist in modern and classic pieces, for instance as head teacher Krull in "Die Kassette" (1961) or as Malvolio in "Was Ihr wollt" (1968).