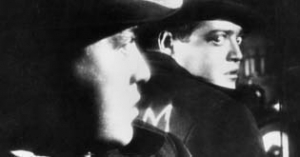 M - A Town Is Looking For A Murderer

A serial killer is keeping Berlin on pins and needles. The police commit everything they have to finding him, but to no avail. Even the great amounts offered as reward money do not help, but only lead to more panic and accusations. Not only the police, but also the underworld is interested in finding the killer, as the constant police raids are "disturbing" their work and, since the killer is an outsider, he is ruining their reputation too. The police are convinced that it can only be a pathologically ill person and investigate all such registered candidates. The underworld organizes the city′s beggars to keep a look out.

As the killer attempts to approach the next child, he is seen by one of the beggars who calls one of his commissioners. The killer is followed into an office building, circled in on and caught. The gangsters hold trial in the cellar of the building and even give the killer a defence lawyer. The court and jury plea for the death penalty, but after the killer admits his guilt, the defence lawyer warns that a psychologically ill person cannot be held responsible for his acts. In the meantime, the police have found out where the killer is and just as the lynch mob is about to execute its sentence, the police storm in and "save" the killer.