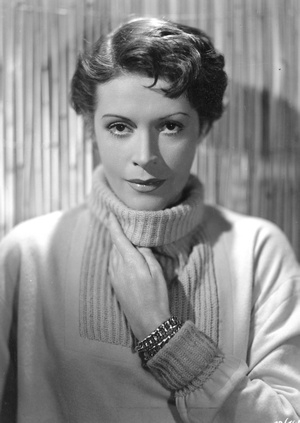 Sybille Schmitz was born in Düren (North Rhine-Westphalia) on December 2nd 1909. After attending a Catholic convent school, Schmitz enrolled at a drama school in Cologne. In 1927, she gave her stage debut at the Deutsche Theater in Berlin, and only one year later performed her first screen role as a struggling female worker in "Freie Fahrt", a film funded by the SPD, Germany's Social Democratic Party.

Her artistic breakthrough came with Carl Theodor Dreyer's "Vampyr", in which she played the suffering girl Léone. In 1932, she played the romantic interest of both Paul Hartmann and Hans Albers in the adventure film "F.P. 1 antwortet nicht". Schmitz was now in high demand, and as one of the leading ladies of German cinema, she became known for playing elegant and somewhat mysterious female characters. She played George Sand in "Abschiedswalzer", Gloria Cheveley in "Ein idealer Gatte" and a Russian spy in "Die Leuchter des Kaisers". Moreover, Schmitz was especially believable in supernatural and mystical stories like "Fährmann Maria" and "Die Unbekannte".

From 1938 on, she was cast in fewer and overtly propagandistic films like "Trenck, der Pandur" and "Wetterleuchten um Barbara". As a result, Schmitz retreated to a remote Austrian village and only occasionally returned to the screen.

The escapist and optimistic Post-War cinema had little use for Schmitz' otherworldly and detached aura. Largely ignored by the film industry, she started a descent into drug addiction and depression which ended with her suicide on April 13th 1955.