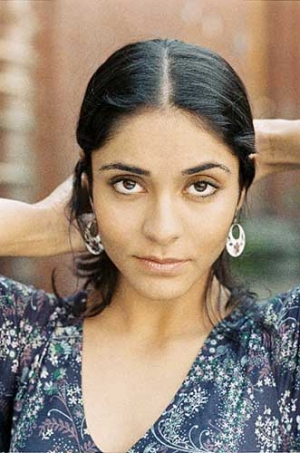 Pegah Ferydoni was born in Teheran on June 25th 1983. When she was two years old, her parents – who are both artists – fled with her to Germany. After internships at several theatres, she played the lead in the short film "Skifahren unter Wasser" (2003). This was followed by numerous appearances in German TV series like "Großstadtrevier", "SOKO 5113" and "Tatort". She also regularly performs at several theatres in Berlin, and alongside her acting career, plays in the band "Shanghai Electric".

Pegah Ferydoni's breakthrough came in 2006 with her role as a highly religious Muslim girl in the acclaimed TV series "Türkisch für Anfänger". She continued to work in film and television, appearing in "Folge der Feder!" (2004), "Wenn wir uns begegnen" (2007, TV), "Sklaven und Herren" (2008, TV) and Til Schweiger's box office hit "Zweiohrküken" ("Rabbit without Ears 2", 2009). She also starred in "Women without Men" by Shirin Neshat, who won the Silver Lion for Best Direction at the 2009 Venice Film Festival.

In 2010, Pegah Ferydoni played the titular role in "Ayla", a drama about a young woman's confrontation with the rigid morale beliefs and gender politics of a conservative Muslim family. A year later, she starred in the feature film "Türkisch für Anfänger" as the sister of the lead character (Elyas M’Barek). A more serious role Ferydoni played in the society drama "Mit geradem Rücken" (2012) as a chambermaid who is sexually harassed by her boss, the hotel manager.

In addition to her acting career, she hosted the TV culture magazine "zdf.kulturpalast" from May 2011 through early 2013. Among Pegah Ferydoni’s other works for TV are the portrayal of Cosima Wagner in the documentary "Wagnerwahn" (2013) as well as her role as Cleopatra in an episode of the documentary series "Frauen, die Geschichte machen" (2013). She appears in a supporting role as a journalist in the much acclaimed TV drama "Tödliche Geheimnisse", and in "Fluss des Lebens: Geboren am Ganges" (2017, TV) she starred as a surrogate mother from India. She also made guest appearances in TV series such as "Mordkommsion Istanbul", "Notruf Hafenkante" and "Pastewka".

On the big screen she appearred in the lead role in Züli Aladag’s culture clash comedy film "300 Worte Deutsch" (2015) as a German-Turkish woman and in a smaller role in the independent production "Hey Bunny" (2016). In "Die defekte Katze" ("A Dysfunctional Cat", 2018) she played another lead role. The film premiered at the Berlinale in February 2018 and was released in German cinemas in October 2018.