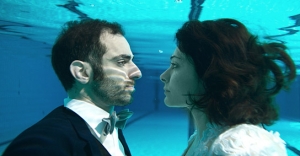 Mina lives in Iran. By Iranian standards she has left it rather late in the day to decide to marry. Kian is a doctor of Iranian origin. He’s single and lives in Germany. Frustrated by a series of unsuccessful blind dates, he finally takes his mother’s advice and uses the traditional Iranian method of arranged encounters with potential partners in order to find a wife. When Mina and Kian meet it’s not exactly love at first sight and yet they both sense the possibility of a life together. Mina decides to marry Kian and start a new life in Germany, with all the uncertainty that might bring. Both have the best intentions to create a harmonious relationship, and yet they do nothing but fail. In a wonderfully understated approach that also exhibits a subtle flair for capturing anxieties, key moments and turning points director Susan Gordanshekan tells this story of a relationship that turns out to be as dysfunctional as the cat that Mina has brought into their shared home. Only by shedding their charged expectations of each other as well as those of their social milieu does the couple finally find a way to live together.