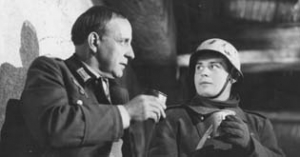 Winter 1942: Like thousands of other German soldiers, Asch and Vierbein have ended up at the Eastern front. Although Vierbein finds a new friend in Kowalski, the squadron commander captain Witterer, a true army veteran, gives them a really hard time. Witterer’s pointless orders reflect the bad habits of many former superiors. And again, Vierbein has to bear the brunt.