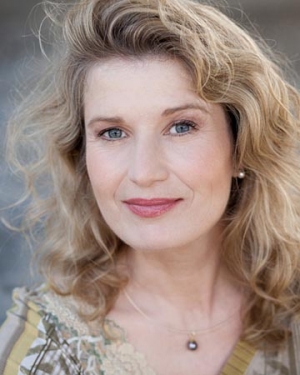 Nina Franoszek was born March 16th, 1963 in Berlin. She is the daughter of fine artists Sabine Franek and the late Eduard Franoszek, who was also a professor at the Berlin University of Arts.

She started out as a dancer and studied mime and dance at the University of Music and Performing Arts in Vienna. At 17 she was "discovered" at the Berlin Film Festival followed by a twofold screen debut in "Domino" (1982) by Thomas Brasch and "Sei zärtlich, Pinguin" ("Be Gentle Penguin," 1982) by Peter Hajek.

Following her Abitur in1981 she studied Performing Arts and Theory of Drama at the Academy for Theater, Music & Media Hannover (HMTMH) and was an exchange student with the Moscow Art Theater School and the Theater Academy Wachtangow in Leningrad in 1984, (now: Saint Petersburg State Theatre Arts Academy ). After her graduation (MFA) in 1986 she began working in regional and national theatre and played a wide range of roles from tragedy to comedy in over 100 feature films, television movies & series. Her first international movie role is in "Buster's Bedroom" (1991) starring and tap dancing opposite Donald Sutherland & Geraldine Chaplin, a whimsical comedy inspired by Buster Keaton, directed by Rebecca Horn and photographed by Sven Nykvist, which earned a German Film Award in Gold (1992).

Together with August Zirner, Luca Barbareschi and Nina Weniger, Franoszek was the leading actress in the German Italian TV series "Zwei Männer und die Frauen" (1995) and guest starred in high quality series like "Tatort" (1999, 2002), the French TV series "Julie Lescaut" (1994), or "Der letzte Zeuge" (2000) with Ulrich Mühe and Jörg Gudzuhn. She performed in award winning TV Movies like "Krambambuli" (1998), in "Schande" ("Disgrace"; 1999) and "Der Zimmerspringbrunnen" (2001). Franoszek played a seductive spy in the international action-adventure series "Berlin Break" (1993), for Columbia/Sony Pictures and RTL Germany, opposite Nicholas Clay, Kai Wulf, Hildegard Knef and John Hillerman and an "African Queen" in the international detective series "The Gang- Waterfront," (1997) where she starred opposite Stacey Keach, Moritz Bleibtreu and Uwe Ochsenknecht.

She starred opposite Jiri Menzel in "Joint Venture" (1994) and performed with Tilda Swinton in "The Party-Nature Morte" (1991). Alongside Jamie Lee Curtis Franoszek was Dietrich's first person narrator in the feature documentary "Marlene Dietrich: Her own song", (2001) directed by Dietrich's grandson David Riva. In "The Pianist" (2002) by director Roman Polanski she played a Polish woman and she was cast as "Patty Duke" in Kevin Spacey's movie "Beyond the Sea" (2004). From 2002-2003 she played the lead in the comedy series "Körner und Köter" together with Max Tidof, Nina Gummich and Alissa Jung.

In 2006 she made her debut as a movie director with the courtroom drama "Der große Videoschwindel" (aka "The Big Con") starring Nikki von Tempelhof, Karoline Eichhorn and Justus von Dohnányi. The short feature film on the subject of "Article 5, the right of freedom of expression" was part of the feature length episode film "GG19". Franoszek distanced herself from the GG19 version of her film and was credited as Alan Smithee. The German directors guild ruled that her director's cut, as well as the films of all other directors, can be seen as independent short films.

In the Fox series "The Loop" (2007) Franoszek starred opposite Philip Baker Hall, Mimi Rogers and Brad Harrison in her first role in Icelandic, personifying Johanna Ingolfsdottir, an Icelandic government representative. This was followed by her role as the director of the Stasi memorial, in the award winning "12 Heisst Ich Liebe Dich" ("12 Means I Love You"), directed by Connie Walther. In 2008 Franoszek was invited to the International Film Festival in Hof again with the feature film "Martha" by young helmer-scripter Mara Eibl Eibesfeldt. Franoszek plays the title role of this modern day "Mrs. Robinson story".

In the USA she guest starred as "Greta" in the American TV series "MAD MEN – Jet Set" in the same year and played "Gala", the Swedish "Good Witch of the North" alongside Ray Wise in Illeana Douglas's award winning web series "Easy to Assemble - Finding North", (2011). Recently she appeared in the satirical Emmy Award winning TV series "Children's Hospital – The Gang Gets Sushi" (2013). Back in Germany she played the recurring role of psychologist Ute Dannowski In the second season of "Weissensee" ("The Weissensee Saga", 2013).

Franoszek is a member of Deutsche Filmakademie, German Directors Guild (BVR), Co–initiator and member of the German Screen Actors Guild (BFFS), as well as member of SAG / AFTRA and Villa Aurora Foundation. She served as a juror for the International Emmy Awards from 2007-2013.