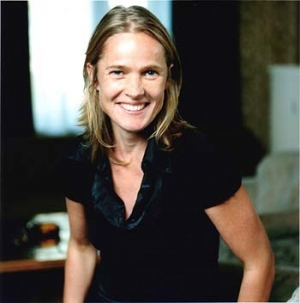 Karoline Eichhorn was born November 9, 1965, in Stuttgart. After finishing school, she started to attend actor's training at Essen's Folkwang drama school in 1986. After graduating from drama school, Eichhorn immediately became a cast member at Berlin's Schaubühne in 1989 where she had already made her stage debut in Peter Stein's production of Anton Chekhov's "The Cherry Orchard". After five successful years at Schauspielhaus Bochum and (again) at Schaubühne, Eichhorn made her TV breakthrough alongside Götz George in Nico Hofmann's award-winning thriller "Der Sandmann".

In the following years, Eichhorn was mainly seen in numerous TV productions. She won the Grimme award as well as the Bavarian TV award for her portrayal of a mysterious refugee in the post-war drama "Gegen Ende der Nacht" ("Daybreak", 1998). From the end of the 1990s on, Eichhorn starred in more and more movie productions. She appeared, for instance, in the controversial historic court drama "Nichts als die Wahrheit" ("After the Truth", 1999), or in the psychological drama "Fremde Freundin" ("Unknown Friend", 1998). In 2002, Eichhorn caused a stir with her performance in Dominik Graf's poetic melodrama "Der Felsen" ("A Map of the Heart"). Her portrayal of a woman, who during her vacation on Corsica starts an affair with a juvenile delinquent that causes far-reaching consequences, won Eichhorn the Bavarian film award and a nomination for the German film award. Critics also praised Eichhorn, who is known to be rather critical with her own performances, for her parts in Thomas Arslan's poetic film "Ferien" ("Vacation") and Bernd Böhlich's summer comedy "Du bist nicht allein".

The following years she featured in a variety of TV productions like Oliver Storz's 1950s drama "Die Frau, die im Wald verschwand" (2009) and in the satirical comedy series "Der kleine Mann" (2009). On the big screen, Eichhorn could prove her versatility in very different films: She had a supporting role in the slapstick comedy "Ossi's Eleven" (2008), and in black comedy "Die Eisbombe" (2008) she starred as mother of a desperately neurotic family. In the film adaptation of the best selling novel "Das letzte Schweigen" ("The Silence", 2010) she gave an impressive performance as a small town mother whose daughter gets killed, while in Thomas Arslan's gangster movie "Im Schatten" ("In the Shadows", 2010) she excelled as the attorney of a felon who has just been released from prison.

In the comedy "Die Kirche bleibt im Dorf" Eichorn was once again cast in a totally different role: She stars as a Southern German villager who is drawn into an odd feud between her fellow citizens and a neighbouring village. The movie directed by Ulrike Grote was released in German theatres in 2012.