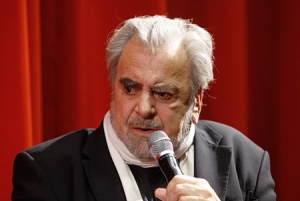 At the reopening of the Deutsches Filmmuseum in Frankfurt, August 12, 2011

Maximilian Schell was born December 8, 1930, in Vienna. The son of the Swiss author Hermann Ferdinand Schell and the Austrian actress Margarethe Noé von Nordberg had three siblings – Carl, Immatriculata (later known as Immy), and Maria – who likewise took up acting careers as grown-ups. In 1938, the family emigrated to Switzerland, where Schell finished secondary school and served in the Swiss Army.

By 1953, he was working as an actor, director and dramatic adviser at the Basel Theater, followed by engagements in Essen, Bonn, Munich, and Berlin. In 1958, he performed on Broadway. The following year, Gustaf Gründgens convinced him to come to the Deutsches Schauspielhaus in Hamburg, Germany, where he played Hamlet under the direction of Gründgens in 1963. During the following decades, Schell continued to act in and direct stage productions at several German and international theaters.

Schell's movie career started in 1955, when he played the role of a desperate deserter in "Kinder, Mütter und ein General" ("Children, Mother, and the General"). His performance in Helmut Käutner's war drama "Ein Mädchen aus Flandern" ("The Girl from Flanders") attracted international attention, and in 1958 he made his Hollywood debut as a Nazi officer in Edward Dmytryk's "The Young Lions". In 1961, Schell won an Oscar for his portrayal of the defense attorney in Stanley Kramer's "Judgment at Nuremberg", also starring Marlene Dietrich. In 1962, Schell, who was by now an internationally acclaimed movie actor, starred alongside Sophia Loren in Vittorio De Sica"s "I Sequestrati Di Altona" ("The Condemned of Altona").

Schell's documentary "Marlene" (1983) is based on the audio tape recordings of his 17-hours-long interview session with Marlene Dietrich. Using original footage, documentary material and interview passages, Schell managed to present an intimate portrait of the screen legend. In 1989, Schell played the leading role in "The Rose Garden", a court drama dealing with unatoned crimes committed by the Nazis. In 1993, he starred alongside Anna Thalbach in Hans W. Geissendörfer's Dürrenmatt adaptation "Justiz". In 2002, Maximilian Schell presented "Meine Schwester Maria" ("My Sister Maria"), a documentary about Maria Schell (1925-2005) who suffered from severe physical and mental problems after her international acting career had ended.