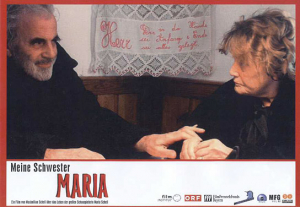 The actor and director Maximilian Schell portrays his 76 year old sister, actress Maria Schell, who lives alone and marked by illness on a mountain farm in Carinthia - surrounded by several televisions showing her old films. He recalls her successes and strokes of fate, shows her much-vaunted vulnerability as well as her strength. He combines film excerpts and interviews with staged scenes from the present; similar to his earlier portrait of Marlene Dietrich, but much closer to the protagonist. The people surrounding her, such as the housekeeper or the inhabitants of the nearby village, speak written dialogues, as does Maria Schell herself - thus her brother lets her once again play the "role of her life".