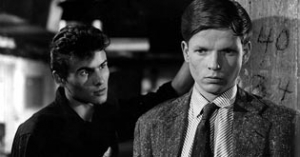 Berlin in the 1950s. No longer able to stand the petty bourgeois tyranny of his father, nineteen year old Freddy has left home. Meanwhile Freddy has risen to the head of a youth gang , leading a life of crime. One day, while preparing his "biggest coup" ever, his younger brother asks Freddy if he can help out his father, who is badly in debt. For his mother’s sake, he agrees. But the planned post office robbery goes wrong. In order to reassert himself as gang leader and to prove to his girlfriend Sissy that he is a man, Freddy breaks into the a villa of a wealthy man. Surprised by the owner, the situation escalates.