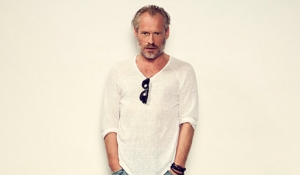 Johannes Krisch, born 1966 in Vienna, Austria, became a cast member of Vienna's Burgtheater already at the age of 22 years. He is a member of the cast to date. Over the years, Krisch became one of the best-known actors of the famous ensemble, performed in productions of plays by Thomas Bernhard, Sergi Belbel, and Franzobel, and collaborated with directors like Jürgen Flimm, Claus Peymann, Paulus Manker, and Leander Haußmann. Furthermore, Krisch and his rock band published the album "Mirrors" in 2003. On the album, the band covers songs by Lou Reed and by The Velvet Underground.

Besides his theatre work, Krisch has been seen in several roles in TV movies and also occasionally on the movie screen since the late 1990s. He has mainly worked with director Reinhard Schwabenitzky for "Zwei Väter einer Tochter" ("Two Fathers for Conny", 2003) and for "Gefühl ist alles" (2005) and with director Martin Kusej for "Höllenangst" (2007). Furthermore, Krisch attracted a lot of attention on the movie screen in Götz Spielmann's film "Revanche" (2008). In the multiple-award winning drama, Krisch plays a bank robber who wants to take revenge on a policeman whom he blames for the death of his girlfriend.

After supporting roles in several TV productions, including Urs Egger's comedy "Böses Erwachen" (2009), Kirsch played the role of police captain Paul Schremser in the theatrical release "Kottan ermittelt: Rien ne va plus" (AT, 2010). He next appeared in the WWII drama "Vielleicht in einem anderen Leben", followed by a turn as the founder of a hippie commune in "Die Vaterlosen (AT, 2011). For his perfomances in these films, Kirsch received the Actor's Award at the 2011 Diagonale Film Festival in Graz.

Kirsch then portrayed a brutal pimp in Fernando Meirelles' "360" (UK/AT/F/BR), and also had a recurring role in the Austrian miniseries "Braunschlag" (2012). Following his role as a hermit in the satirical drama "Finsterworld", he played the husband of an amnesiac woman in "Vergiss mein Ich" (2014).