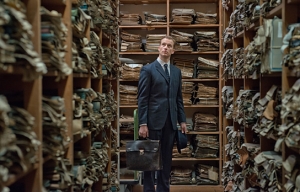 Germany 1958. Reconstruction, economic miracle. Johann Radmann has just recently been appointed Public Prosecutor and, like all beginners, he has to content himself with boring traffic offenses. When the journalist Thomas Gnielka causes a ruckus in the courthouse, Radmann pricks up his ears: a friend of Gnielka's identified a teacher as a former Auschwitz guard, but no one is interested in prosecuting him. Against the will of his immediate superior, Radmann begins to examine the case – and lands in a web of repression and denial, but also of idealization. In those years, "Auschwitz" was a word that some people had never heard of, and others wanted to forget as quickly as possible. Only the Prosecutor General Fritz Bauer encourages Radmann's curiosity; he himself has long wanted to bring the crimes committed in Auschwitz to the public's attention, but lacks the legal means for a prosecution. When Johann Radmann and Thomas Gnielka find documents that lead to the perpetrators, Bauer immediately recognizes how explosive they are and officially entrusts all further investigations to Radmann.

The young prosecutor devotes himself with utmost commitment to his new task and is resolved to find out what really happened back then. He questions witnesses, combs through files, secures evidence and allows himself to be drawn into the case to such an extent that he is blind to everything else – even to Marlene Wondrak, with whom he has fallen hopelessly in love.

Radmann oversteps boundaries, falls out with friends, colleagues and allies, and is sucked deeper and deeper into a labyrinth of lies and guilt in his search for the truth. But what he ultimately brings to light will change the country forever…