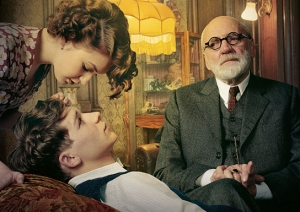 Film adaption of Robert Seethaler’s novel of the same name published in 2012. It focuses on 17-year-old Austrian Franz Huchel, who moves from his hometown to Vienna not long before the outbreak of the Second World War. In Vienna, he becomes the trainee of tobacconist Otto Trsnjek, a war invalid from the First World War. One of the regular customers in Trsnjek’s shop is Sigmund Freud, whose advice Franz seeks when he falls in love with the young vaudeville dancer Aneszka. However, Freud's help is not of much use to Franz, because it turns out that the famous psychoanalyst is not particularly knowledgeable when it comes to love and women. Nevertheless, an unusual friendship develops between Freud and Franz. In the meantime Austria is annexed into Nazi Germany and soon fascists start to target Freud and his family.