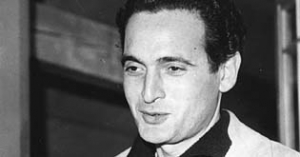 Imo Moszkowicz was born in Ahlen, Westphalia on 27 July 1925 and is one of six children of a Jewish shoemaker. Moszkowicz's father emigrated to Argentina due to the political situation in Germany and the seizure of power by the National Socialists, but the attempt to have his family join him failed. Following the November progroms 1938, the entire family was displaced and initially resettled in Essen until they were deported to the Auschwitz concentration camp in 1942. Both his mother and his two brothers Hermann and David were murdered there. Moszkowicz himself was deported to the Buna/Monowitz concentration camp for forced labor. He was liberated by the Red Army in 1945, and then returned to Germany.

Only a few weeks after his liberation, Moszkowicz, who had developed an interest in acting, was already performing at the Junge Bühne in Warendorf and the Westfalentheater in Gütersloh. He then enrolled at the Dumont-Lindemann Acting School in Düsseldorf. There, Gustaf Gründgens took notice of him and brought him to the Düsseldorf Schauspielhaus as his assistant director. In the same function he worked together with Fritz Kortner at the Schillertheater in Berlin.

These experiences made Moszkowicz shift his focus from acting to directing. He worked as a director and actor at the Kammerspiele in Santiago de Chile and in Sao Paulo, Brazil, he directed the Pro Arte theatre. At the Israeli National Theatre Habimah in Tel Aviv in 1961, he directed Siegfried Lenz's "Time of the Innocent", the first play by a contemporary German-speaking author to be performed in Israel. In German-speaking countries he directed more than 100 performances, for example at Zurich Opera House, Munich's Gärtnerplatztheater, Frankfurt Opera and the Graz Opera House. Throughout his life, Moszkowicz's understanding of theatre was shaped by the ideal of faithfulness to the work and respect for the poets' texts.

At the same time, from the end of the 1950s, the still young medium of television became a second focus of his career. There he initially staged mainly plays in the studio that were often broadcast live, such as Marcel Pagnol's "The Photographer's Wife" (1958) and Mary Chase's "My Friend Harvey" (1959).

He made his debut as a feature film director in 1961 with the tragic comedy "Max, der Taschendieb" ("Max the Pickpocket"), with Heinz Rühmann in the title role. After that he only directed two more movies for the big screen, the melodrama "Straße der Verheißung" ("Street of Temptation", 1962), about a man (Mario Adorf) between two paths of destiny and two very different women (Karin Baal and Johanna von Koczian), and the turbulent romantic comedy "Es war mir ein Vergnügen" which was at the time x-rated because of the humorously presented procuration. Later the film got a release without age restriction.

In the seventies and eighties, the spectrum of his TV work ranged from the Theodor Herzl biopic "Wenn ihr wollt, ist es kein Märchen" (1973), children's series such as "Klikla-Klawitter" (1973-76) and the "Tatort" episode "Das Lederherz" (1981) to the theatrical historical drama "Weltuntergang" (1984). The Hamburg milieu and character study "Der kleine Riese" (1985) with Hans Clarin and Doris Kunstmann was his last directorial work for many years. One of the most unusual steps in Moszkowicz's career is certainly his role as producer in Eckhart Schmidt's scandalous feature film "Der Fan" ("The Fan", 1981), about a teenager (Desiree Nosbusch) who kills, dismembers and eats the pop star she adores.

From 1989 to 1993 Moszkowicz was the director of the Kreuzgangspiele Feuchtwangen. In 1996 his autobiography "Der grauende Morgen" was published, in which he tells of his time in the concentration camp and his post-war life at the theatre and in the TV industry. The book contains a striking account of how memories kept haunting him, how he wanted to forget and was unable to. As a visiting professor he taught at the Salzburg Mozarteum, the Max Reinhardt Seminar in Vienna and at the Graz University of Music and Performing Arts. In 1991 he was awarded the Grand Federal Cross of Merit.

In 1994 Imo Moszkowicz was part of the production team of Sönke Wortmann's comedy hit "Der bewegte Mann" ("Maybe, Maybe Not"), and shortly afterwards he directed the farmer's drama "Über Kreuz" (1995, TV), for which he was awarded the Bavarian Film Prize for Best Director. After another break, the animation series "Pumuckls Abenteuer" was his last directorial work in 1999. His filmography at that time included around 200 TV movies and series episodes.

In 2007 Moszkowicz published the book "Schlussklappe. Ein Protokoll von Hoffnung und Verzagen", the chronology of a film project that was rejected by a public broadcaster in the early 1980s because they didn't want to expose their audience to more films about the Holocaust. The project was based on Marga Spiegel's autobiographical book "Retter in der Nacht" ("Saviors in the Night"), in which she describes how her family from Ahlen in Westphalia was hidden from the Nazis by farmers from 1943 to 1945. The film, co-written by Moszkowicz and Otto Jägersberg, was eventually realised in 2009 under the title "Unter Bauern" ("Among Pesants"). The leading roles were played by Veronica Ferres and Armin Rohde; the director was Ludi Boeken.

Imo Moszkowicz, about whom the 55-minute documentary "Leben ohne Hass - Imo Moszkowicz - Ein Regisseur aus Deutschland" was released in 2008, often spoke about the Holocaust in his public appearances. He was a long-standing member of the Council of Holocaust Survivors at the Fritz Bauer Institute.

On 11 January 2011 Imo Moszkowicz died after a long illness at his home in Ottobrunn near Munich. He was married and left two children. His son Martin Moszkowicz works as a film producer, his daughter Daniela Dadieu is an actress and lives in Ottobrunn.