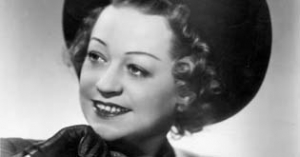 Mathilde Ella Dorothea Margarethe Nowka, born February 27, 1903, in Hanover, grew up in Klotzsche and in nearby Dresden and attended Neustädter Höhere Töchterschule and Friedelsche Privatschule in Dresden-Blasewitz. In 1921, she married the Viennese merchant Josef Weiser and gave birth to their son Rolf Günther in 1922.

When the family moved to Berlin, Weiser took singing lessons, became a disciple of Volksbühne, performed in operettas and several cabaret revues and made guest performances at Hamburg"s Thalia Theater and Dresden"s Komödienhaus. After her divorce in 1934, she lived together with the film lawyer and producer Dr. Hermann Schwerin (1902-1970) whom she married in 1958. Weiser started her film career with numerous minor roles in subaltern positions such as a cook, a maid, a gentlewoman, or a valet.

Finally, in 1937, Weiser got the chance to prove her quick wit in a leading role as "Die göttliche Jette" ("The Divine Jetta"), a comedian from suburbia who becomes a revue star in the metropolis. But after two more leading roles in "Meine Freundin Barbara" ("My Friend Barbara") and "Ehe In Dosen", Weiser again had to settle for minor roles. Shortly after the end of the war, in 1947, Grethe Weiser performed at Hamburg"s Junge Bühne and went to Hamburg"s Kammerspiele in 1949, where she played her signature role as Mary Miller in "Das Kuckucksei" for the first time. On November 2, 1954, Weiser celebrated her 25th stage anniversary as Mutter Wolffen in Gerhart Hauptmann"s "Der Biberpelz" ("The Beaver Coat"). In the spring of 1954, she moved back to Berlin.

In post-war cinema, Weiser finally became the legendary "good-hearted loudmouth" and played prevailing widows and resolute older women with a lot of mother wit and aggressiveness. She played boyish and ladylike at the same time, and was cheeky in an elegant fashion. During the 1960s, Weiser performed at theatres in Berlin and Munich. She made her last performance in 1969 at Theater am Kurfürstendamm in Viktor de Kowa"s production of "Die lieben Kinder" ("Dear Children").

On Ocotber 2, 1970, Grethe Weiser died in a car accident near Bad Tölz. Her husband was also killed in the accident.