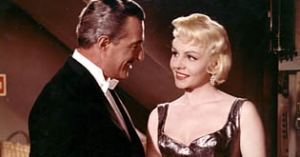 Catherine Miller is the celebrated young star on stage of the revue theatre "Casino de Paris". One evening, the famous writer Alexander Gordy offers her the leading role in his new play. Catherine gladly accepts the offer and hopes to launch her acting career. Her mother is also delighted, in marked contrast to her father who is exasperated about the fact that Catherine wants to end her career at the revue theatre.

Gordy invites Catherine to Cannes where he had travelled to in advance with his secretary Jacques. However, Jacques is no ordinary secretary but in fact writes all the plays of his master… and he also knows about his employer’s skills as a seducer. Together with Catherine’s father and Mario, the director of "Casino de Paris", Jacques who has fallen in love with Catherine makes plans to pry Catherine loose from the seducer Gordy’s hands. After several complications and mix-ups, he can finally put Catherine into his arms, and Gordy also soon finds a new "ideal cast" for his play.