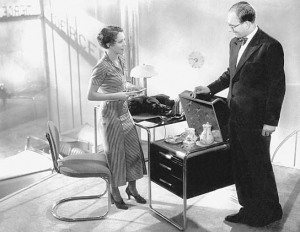 People on Sunday. Kitty Holm’s girlfriends dream of men and clothes. But Kitty, a salesgirl in a car showroom has bigger dreams – she wants to be a great lady. On Monday, Kitty manages to sell a luxury automobile for the princely sum of 40,000 deutsche marks. It seems her dream might be fulfilled when buyer Mr. Thurner, and his daughter Ria, ask Kitty to deliver the new auto to Wolfenstein Castle herself. On the drive, she plays the great lady, but when she introduces herself as a countess to the son of the family, she’s gone just a bit too far ...

Gerhard Lamprecht’s merry sound film operetta celebrates the escapist dreams of glory of lowly shop girls that were the hallmark of Erich Pommer’s comedies for the Ufa studio. Caricatures of old nobility and zealous servants echo Lubitsch’s early absurdist films, while the unrestrained use of high and low angles, and bizarrely magnified images remind us of expressionist film. A farm workers’ choir imitates the German ensemble Comedian Harmonists, while an up-tempo song sounds a lot like Kurt Weill. But it is Käthe von Nagy who provides the crowning glory to this rich fantasy, as a happy Material Girl. "Everything’s just like a fairytale."