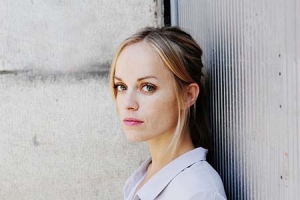 Friederike Kempter, born in Stuttgart on August 23, 1979, gained her first acting experience while still in high school with small appearances in cinema ("David im Wunderland" ["David in Wonderland"], 1997) and television ("Sylvia - Eine Klasse für sich", 1998). Her first leading role was in the TV comedy "Zwei vom Blitz getroffen" (2000), about a teacher who miraculously swaps bodies with her 16-year-old daughter.

From 2003 to 2006, Kempter trained at the Berlin acting school "Der Kreis." Parallel to this, she appeared in guest roles in series such as "Ein Fall für Zwei" (2005) and crime series such as "Pfarrer Braun" (2006). Since 2002, she has played the assistant to the commissioners portrayed by Jan Josef Liefers and Axel Prahl in the Münster "Tatort" episodes. Between 2008 and 2012, she appeared in countless sketches on the comedy show "Ladykracher". In 2012, she took on the lead role of an experienced police officer in the early evening series "Heiter bis tödlich: Hautstadtrevier".

On the big screen, Kempter could be seen as the best friend of young Uschi Obermaier in the biopic "Das wilde Leben" ("8 Miles High", 2007), as the ex-girlfriend of the title character in the bestselling film adaptation "Vollidiot" ("Complete Idiot", 2007) or as the mistress of a dedicated single man in Marc Rothemund's comedy "Mann tut was Mann kann" ("Men Do What They Can", 2012). For her role in the highly acclaimed comedy "Oh Boy!" ("A Coffee in Berlin", 2012), as the slightly neurotic former classmate of a student stumbling through life, she was nominated for the German Film Award in 2013.

Despite this success, Kempter appeared exclusively in television productions over the next three years. In addition to her regular leading roles in Münster's "Tatort" and "Heiter bis tödlich" (until 2014), she was part of the main cast of the series "Add a Friend" (2012-14) and "Die Lotto Könige" (2012-15).

It was not until 2016 that she again appeared more frequently in feature films. She was part of the cast of the body-swapping comedy "Seitenwechsel" (2016), was the still-girlfriend of Friedrich Mücke's main character in the romantic comedy "SMS für dich" ("Text for You", 2016), a traumatized police officer in the drama "Einsamkeit und Sex und Mitleid" ("Sex, Pity and Loneliness", 2017) and a lonely woman looking for a partner in the relationship comedy "Safari - Match Me If You Can" (2018).

Kempter also continued to take on TV roles, such as the daughter of a jolly widower in the comedy "Endlich Witwer" (2018) and its sequel "Endlich Witwer - Forever Young" (2021). The last "Tatort" episode with Kempter as detective inspector ran in January 2020. She took over the docu-series "Friederike klopft an!" in 2021, in which she meets non-conformist and combative women.