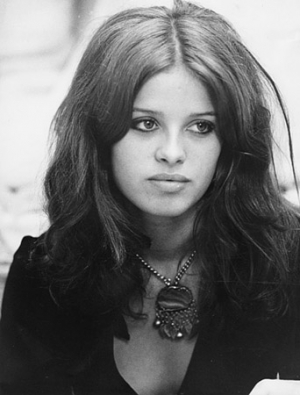 Uschi Obermaier is an icon of the 1968 movement in Germany – as pin-up girl of the student protests as well as a popular cult figure of feminism. She appeared in several movies but the story of her life is even more fitting for a film. Obermaier was born in 1946 in Sendling, a district of Munich. She initially worked as a photo model and became known for her photos in the youth magazine "twen". In 1968, Obermaier was on the road with the Munich Krautrock band Amon Düül and met Rainer Langhans who was one of the founders of the political flat share "Kommune 1" in Berlin. Uschi Obermaier then moved in with Langhans and both became the prototypical couple of the sexual revolution in Germany.

In 1968 and 1969 Obermaier starred in Rudolf Thome's first two feature films, "Detektive" and "Rote Sonne" ("Red Sun"). As a member of a flat-sharing group of raving women who get rid of the men they brought in the flat as soon as they are done with them after five days, she in the end even shoots the man she loves. After playing a part in Vlado Kristl's experimental film "Film oder Macht", Obermaier made her last appearance in a movie in Ulli Lommel's 1971 movie "Haytabo" which also starred Rainer Langhans. After moving out of "Kommune 1", Obermaier returned to Munich with Langhans but soon left him. The yellow press eagerly followed her affairs with Mick Jagger, Keith Richards, and Jimi Hendrix , before Obermaier met club owner Dieter Bockhorn from Hamburg and travelled with him for several years in a bus through Asia, the USA, and Mexico. Bockhorn died in 1984 in Mexico in a motorcycle accident.

For many years, until 2019, Uschi Obermaier lived and worked as a jewellery designer in the Topanga Canyon near Los Angeles. From there she moved to Portugal, where she lives on the Algarve coast.