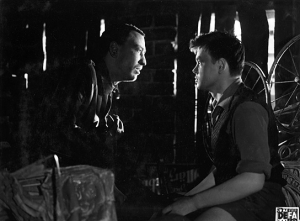 Fred Düren was born December 2, 1928, in Berlin and attended drama school at Deutsches Theater Berlin from 1945 to 1947. He performed at several theatres in Potsdam, Ludwigslust, Wismar, and Schwerin, before he returned to Berlin at the beginning of the 1950s to perform at Berliner Ensemble under the direction of Bertolt Brecht. From 1958 to 1988, Düren was also regularly seen in productions of Deutsches Theater. He made a name in the German theatre scene for his performances in classic roles such as Shylock in Shakespeare's "The Merchant of Venice" or Trygaeus in Aristophanes' "Peace".

DEFA discovered the talented actor in the mid-1950s. He starred in the role of the Communist Peppo in Heiner Carow's film "Sie nannten ihn Amigo" (1959), played the title role in "Der Fliegende Holländer" ("The Flying Dutchman", 1964), directed by Joachim Herz, or starred as Metzger Grünstein in Bernhard Wicki's "Die Grünstein-Variante" (1984).

On television, Düren was seen in the banned short film "Monolog für einen Taxifahrer" (1962) by Günter Stahnke, or in three-part Fallada adaptation "Jeder stirbt für sich allein" (1970). In Hans-Joachim Kasprzik's film adaptation Düren played the independent Otto Quangel who after the death of his son in World War II turned against the fascist regime and started to write postcards to Adolf Hitler.

Fred Düren's acting career ended in the 1980s. He resigned from the SED, converted to the Jewish faith, and left the GDR. Since then, he was living in Israel, where he acted as a rabbi.