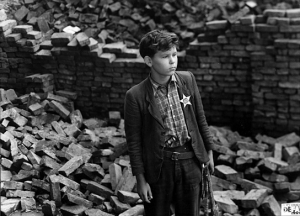 Berlin in the 1950s. Kalle, 13, lives with his family in Wedding in West Berlin. He is crazy about Wild West novels. Proudly sporting a sheriff’s star on his jacket, he is the leader of the "Teddy Gang", a clique of boys of his age. When Kalle’s family moves to the eastern sector of the city, he finds it difficult to adjust to his new surroundings. His self-confident, gruff manner, a tendency to boast and his interest in pulp fiction don’t exactly endear him to his new classmates. A particular rivalry develops between Kalle and fellow pupil Andreas.

"Sheriff Teddy" is being screened at the presentation of the eighth Heiner Carow Prize. This year, for the first time, the DEFA Foundation will be conferring its €5,000 award on a German documentary, feature or essay film from the Perspektive Deutsches Kino section. The jury members this year are filmmaker and last year’s award-winner Annekatrin Hendel, Anne Möller from the DEFA Foundation and filmmaker Jan Speckenbach.

This event is barrier-free. "Sheriff Teddy" will be screened with German subtitles for the hearing-impaired and audio description. There will also be sign language and live speech-to-text interpretation at the award ceremony.