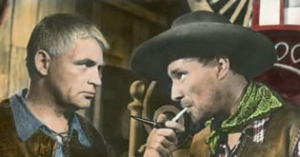 The Sons of Great Bear

In the second half of the last century there are only few tribes of the indigenous people of the northern USA left who are living in freedom. Most of the tribes have given up the fight against the superiority of the white men and live in reservations. But a small tribe desperately tries to defend its freedom. But when Chief Tokai-ihto is taken captive after he had been betrayed, it is easy for the white men to defeat the rest of the tribe. From now on, they have to live in a reservation where they are guarded by soldiers.

Tokai-ihto is also sent from captivity to the reservation because the white men think he would cause no harm inside the reservation. But they underestimate the tribe′s desire for freedom and its undaunted courage. The Indians decide to flee to Canada to start a new life in freedom there. Although they manage to escape, they encounter several dangers: An enemy tribe tries to block their way at a river. Thus their last fight that decides about freedom and captivity, and about life and death begins.