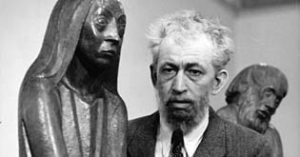 Germany, 1937. Sculptor Ernst Barlach (1870 – 1938) lives as an outsider in Güstrow in rural Mecklenburg. The Nazis have banned exhibitions of his work and some of his cenotaphs, deemed anti-war, have already been removed from public display. In the very wee hours of August 24, 1937, unknown perpetrators steal Barlach’s sculpture "floating angel" from the cathedral. A few hours later, the artist goes to the scene of the crime. On his way home, he reflects on his situation as an "emigrant in his own country" and on his self-image as an artist. An encounter with a persecuted communist requires his involvement and the test of a siren fuels his fear of war.

Production of the film was suspended by the East German authorities in 1966 due to its "fuzzy philosophical concept" and a lack of "regard for its sensationalist effect". It was re-edited and overdubbed for completion in 1970. The film is as sparing and awkward as Barlach’s sculptures – with organ music interruptions, Barlach’s inner monologues merge into an expressive and associative narration. The camera meanwhile concentrates on the protagonists’ expressive faces and the landscape, always returning to Barlach’s works.