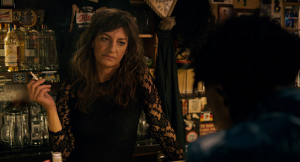 Catrin Striebeck was born in Vienna on April 18, 1966. The daughter of actors Peter Striebeck and Ulla Purr was raised in Hamburg, but later returned to Vienna to study acting at the renowned Max-Reinhardt-Seminar. For 13 years, she was a company player at the famous Deutsches Schauspielhaus in Hamburg. During that time, she had memorable roles in a number of classic plays (Gretchen in "Faust 1 und 2", Julia in "Romeo und Julia") and worked with directors like Franz Xaver Kroetz ("Woyzeck"). She also guest-starred in stage productions in Berlin, Mannheim and Bochum. In 2009, she joined the company of the Burgtheater in Vienna.

Striebeck made her screen debut in 1992 with a supporting role in Lars Becker's gangster film "Schattenboxer". The same year, she played an escort girl in Uwe Schrader's acclaimed "Mau Mau" (1992). In 1995, she portrayed a gangster moll and secret mastermind in Lars Becker's "Bunte Hunde" ("The Break").

In the drama "Zwischen den Jahren", Striebeck portrayed the new girlfriend of an ex-convict (Peter Kurth) who is haunted by his past.