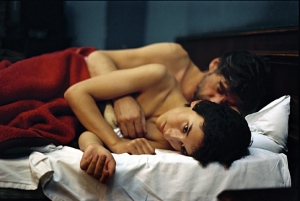 "You can put an end to your life without killing yourself," whispers the doctor. And Cahit, 40, whose suicide attempt has brought him to the psychiatric clinic, knows what he means: by starting a new life. Yet the anguish in his soul continues to cry out for drugs and alcohol to numb his pain. Sibel – young, pretty and, like Cahit, Turkish-German – loves life too much for a proper Muslim girl. To escape from the prison of her devout, conservative family, she fakes a suicide attempt. But it brings shame, not freedom; only marriage can save her. And so she begs Cahit to marry her. Reluctantly, he agrees. Perhaps to save her. Perhaps to do one meaningful thing in his life. They share an apartment, but little else. She savors her freedom; he has his occasional fling with his sometime girlfriend. Until love enters his life on tip-toes. As he falls in love with Sibel, he finds a new joy in life, the strength to go on. Sibel continues to see other men. Until she, too, realizes that she loves Cahit. But by now it is too late: an explosion of jealousy ends in a violent death. Cahit is sent to jail and Sibel flees to Turkey. Her heart, her mind, her soul are still with Cahit – but for how long?