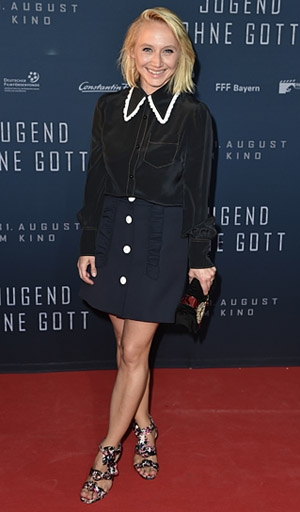 Anna Maria Mühe, born 1985 in Berlin, is the daughter of Ulrich Mühe and Jenny Gröllmann. She met director Maria von Heland in a bar in Berlin and made her movie debut in Heland's drama "Große Mädchen weinen nicht" ("Big Girls Don't Cry") – a performance that won her an award at the Las Palmas film festival. In 2003, Mühe played a school girl whose unrestricted love life causes a tragedy in Achim von Borries' drama "Was nützt die Liebe in Gedanken" ("Love in Thoughts"). Again, Mühe won an award for her performance, this time the award for "Best actress" at the 2004 Copenhagen film festival.

Mühe then starred in several TV productions and made a striking performance as a daughter of sect followers who tries to break free from her rigid surroundings in Jobst Oetzmann's "Delphinsommer". Mühe was also highly praised for her part in Maris Pfeiffer's "Meine böse Freundin". She then returned to the big screen in Bülent Akinci's "Der Lebensversicherer" ("Running On Empty") and Ed Herzog's "Schwesterherz". Her role in Christian Schwochow's "Novemberkind" ("November Child", 2008) not only garnered her the newcomer award at the Filmkunstfest Mecklenburg-Vorpommern, but also a nomination for Best Actress at the German Film Prize.

Following supporting roles in Til Schweiger's "1 ½ Ritter – Auf der Suche nach der hinreißenden Herzelinde" (2008), Julie Delpy's "Die Gräfin" ("The Countess", 2009) and Alain Gsponer's "Lila, Lila" (2009), Mühe played the lead in two productions in 2009/2010: In "Live Stream" she portrayed a suicidal student, and in Hans W. Geissendörfer's "In der Welt habt ihr Angst" ("In the World You Have Fear"), released in early 2011, she played a music student who follows her lover into heroin addiction. Also in 2011, she had a supporting role in Schwochow's psychological drama "Die Unsichtbare" and starred in the TV production "Im falschen Leben".

In 2012 Anna Maria Mühe was chosen as one of the European Shooting Stars and starred in the two-part TV movie "Deckname Luna" as a double agent in the Cold War. Following a turn as a caretaker in the tragicomedy "Bis zum Horizont, dann links!" (2012), she played the frustrated wife of a bank clerk in Peter Thorwarth's comedy "Nicht mein Tag" (2014).

Anna Maria Mühe also remained one of the most sought-after actresses of the German film and television scene in the next years. In Vivian Naeffe's body-switch comedy "Seitenwechsel" (2016), for example, she showed her comedic talent as a football PR woman. In the TV movie "Die Täter - Heute ist nicht alle Tage" (2015/2016), directed by Christian Schwochow, she impersonates NSU terrorist Beate Zschäpe, a role she also took on in the same year in "Die Ermittler - Nur für den Dienstgebrauch". Both productions were part of a trilogy commissioned by the public broadcaster ARD, and deal with the history and crimes of the NSU terror organization.

One year later, Mühe could be seen on the big screen as a psychologist of a group of students in an isolated high performance camp in Alain Gsponer's much acclaimed Ödön von Horvath film adaptation "Jugend ohne Gott" ("Godless Youth").

Between 2016 and 2019, Anna Maria Mühe played major roles on television, including investigator Nora Weiss in the crime series "Solo für Weiss" and an alcoholic welfare recipient in the Netflix series "Dogs of Berlin" set in the Berlin underworld. In the six-part series "Die Neue Zeit" ("Bauhaus - A New Era"), which deals with the founding years of the State Bauhaus in Weimar, she embodied a fictionalised version of the Bauhaus student, painter and artist Dörte Helm under the direction of Lars Kraume.

In 2019, Mühe was once again in front of the camera for a feature film: in the children's film "Lassie – Eine abenteuerliche Reise" ("Lassie Come Home"), she played the mother of the young title hero Flo, who sets out in search of his dog Lassie. In a leading role as the daughter of Katja Riemann's character in the TV multi-parter "Unsere wunderbaren Jahre", she appeared on TV in March 2020. Also in March 2020, filming began for Marie Noëlle's "Heinrich Vogeler", a biopic about the Art Nouveau painter of the same name and resident of the artists' colony in Worpswede, in which she embodies Vogeler's wife, whom he portrayed in several of his paintings.