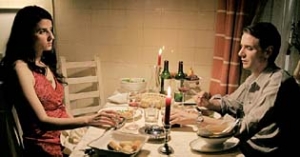 He knew it would take a long time – but this long? Insurance salesman Burkhard Wagner left his family promising them a better life on his return. All he has to do is sell enough policies. But time drags on and Burkhard turns into the Flying Dutchman of Germany’s motorways. His contact with his family now boils down to him leaving the odd report on the answering machine. Nevertheless, Burkhard sticks resolutely to his plan. But then, shortly before he has sold all his policies, he runs out of steam – mentally and spiritually.

He meets luckless Carolin at a motorway service station. Business at Carolin’s small hotel by the motorway has been in the doldrums for years but here, after years of restless perigrinating, Burkhard at last finds a bit of peace and happiness. The pair share a love of French chansons and are both lonely – in spite of being together.

But somebody like Burkhard isn’t the type who sticks around. Carolin seems to realise this more than anyone. And this is why she accompanies him, like a guardian angel, on his last and most difficult journey – back to real life.