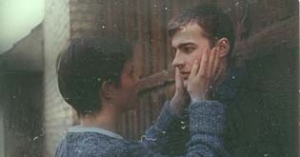 A small town in East Germany after reunification. Everything is changing, the railway station, including the bar, is being closed down, and someday soon the trains won′t stop any more. The place and the inhabitants have been left "outside time". Former allies, the Russian soldiers, have left

One of them, Sergei, wants to stay in Germany and hides himself in an abandoned barracks. On one of these nightly forays he meets Sophie, the young station superintendent. Initial shyness grows into love which, however, threatens to destroy the harmony of Sophie′s little family. Her mother and older brother Georg feel disturbed by Sergei, although both of them in their own way feel strongly attracted to and develop a relationship with the quiet stranger. Juvenile jealousy and the fear of change drive Georg to kill the intruder, hoping to save the happiness of the familiy. But the opposite happens. Sophie leaves the unhappy place, mother and brother staying behind "outside time".