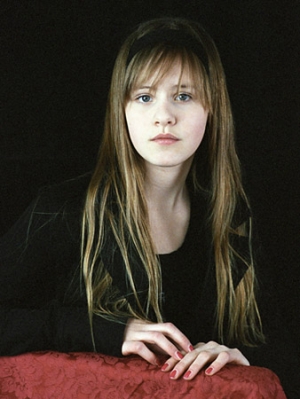 Lucie Hollmann, born August 23, 1993, in Berlin, became an actress by accident: In 2005, then 11-year old Lucie attended a casting for the children"s film "TKKG und das Geheimnis um die rätselhafte Mind-Maschine" ("TKKG and the Mysterious Mind Machine") – and was immediately shortlisted for the movie"s cast. Although in the end, she did not get the part, Hollmann landed a leading role for the children"s book adaptation "Die wilden Hühner" ("Wild Chicks") and also played leading roles in the two sequels of the successful girl gang adventures. In 2008, Lucie Hollmann, who still goes to school, played a leading role in the teenage love story "Mein Freund aus Faro" ("To Faro").

She starred in another lead role in Mark Monheim's 30 minutes long teenager drama "Mit sechzehn bin ich weg", which won the First Steps Award 2008. In 2009, Hollmann received a special prize at the New Faces Awards. She appeared in important supporting roles in Pia Strietmann's family drama "Tage die bleiben" ("A Family of Three") as well as in Dror Zahavi's TV drama "Und alle haben geschwiegen" (both 2011). In addition to that Hollmann has been appearing in guest roles in TV (crime) series, such as "Küstenwache", "Polizeiruf 110", "Der Usedom-Krimi" and "Tatort". In the multi-award-winning feature film "LOMO - The Language of Many Others" (DE/FR 2017) Hollmann played a key role as the crush of a high-school graduate who starts a dangerous experiment after he is rejected by her.